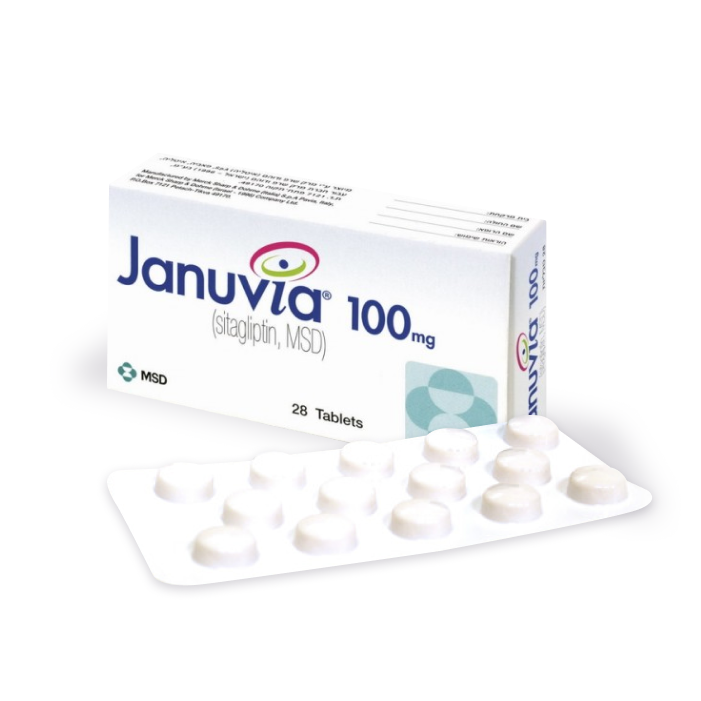 Januvia is an orally administered prescription medication used to control blood sugar levels in patients with type 2 diabetes. It is not indicated for use by patients suffering from type 1 diabetes or diabetic ketoacidosis (increase in acid levels of the body in patients with uncontrolled diabetes). The generic name of Januvia is sitagliptin. It is manufactured by Merck and is available in 25 mg, 50 mg, and 100 mg strengths. All three forms of Januvia are round film-coated tablets that vary in color and the codes printed on the tablets. The 25 mg, 50 mg, and 100 mg tablets are colored pink, light beige, and beige with the numbers “221”, “112”, and “277” printed on the tablets respectively.

Januvia is prescribed for use in conjunct with a healthy diet and exercise. If blood sugar levels remain uncontrolled, other diabetic drugs, such as metformin, are prescribed alongside sitagliptin. Janumet and Janumet XR are combination drugs containing both metformin and sitagliptin for patients requiring both drugs. Januvia is typically taken once daily, but dosage may vary depending upon how the patient responds to the drug.

How does Januvia work?

Januvia (sitagliptin) belongs to a class of drugs known as dipeptidyl peptidase-4 (DPP-4) inhibitors. Januvia has a dual mechanism of action. Firstly, it increases the production of the hormone insulin by pancreas. Secondly, it reduces overproduction of glucose by the liver. Therefore, both blood insulin and glucose levels can be normalized with the use of Januvia. To achieve these targets, Januvia inhibits DPP-4 enzyme. DPP-4 enzyme is responsible for destroying two hormones: glucagon-like peptide (GLP) and glucose-dependent insulinotropic polypeptide (GIP). GLP-1 and GIP are released by the intestines after a meal. Both these hormones increase the production and release of insulin. GLP-1 has an additional function of reducing blood glucose levels by inhibiting the secretion of the hormone glucagon by the liver. Glucagon is responsible for increasing glucose production and blood glucose levels. In effect, inhibiting DPP-4 through sitagliptin increases insulin levels and reduces glucagon levels and, thus, blood glucose levels.

Most people taking Januvia do not experience any serious side effects. Some commonly reported side effects are:

Some rare but serious side effects with Januvia are:

Although severe allergic reactions to sitagliptin rarely occur, some individuals may be allergic to the drug. Symptoms of an allergic reaction include rashes, itching, swelling of the face, tongue, or throat, dizziness, and difficulty in breathing or swallowing.

In case of serious side effects or signs of an allergic reaction, the medication should be discontinued and immediate medical attention should be sought.